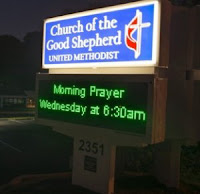 I read an article last week (read here) about a church in Virginia who was cited by the county government for changing their LED sign more than twice in 24 hours. The church was apparently unaware of this particular restriction and tried to work with the county on a compromise. Unfortunately they couldn’t reach an agreement so the church is now suing the county saying that the law restricts their free speech and free exercise of religion.

I agree with the church, and not just because I work in the LED sign industry. I believe super restrictive sign codes are wrong in general. Signs are usually the first communication that organizations have with the local community. LED signs have taken this communication to the next level, allowing clear and specific messages to be given. This country was built on free speech, free exercise of religion, entrepreneurship, and hard work. I believe overly restricting the ability of organizations to communicate goes against these principles. That being said, I understand the need to make sure we don’t have giant digital billboards shining into a residential area.

Reasonable restrictions and guidelines are necessary, but limiting message changes to only two per 24 hours is going too far and might be overreaction by the county, worried about turning the area into a mini Las Vegas. This “Las Vegas”  fear has its roots in the fact that LED signs are still relatively new to the commercial market. In the beginning, only organizations with deep pockets (like casinos) could afford the full color high quality signs.  Additionally, these new LED signs were purchased not just to communicate, but to be an attraction on their own, seeing who could make the biggest and fanciest sign on the strip.
LED signs are much more affordable, and are now used regularly for churches, businesses, schools and other smaller organizations. Unfortunately, the old idea of an LED sign’s purpose continues to affect sign codes across the country today. This story has received more coverage than normal, but it is by no means an uncommon situation. I have personally been involved with a number of these type of situations across the country and they can be extremely frustrating for the organization involved, who in most cases just wants to replace old technology and better communicate to the public.

I am glad to see this church fighting for their free speech rights, and that this story has received national press. It will be interesting to see how it turns out. The county has already backed off from there original stance (see update here), and many local officials have agreed with the churches position. Supervisor Pat S. Herrity (R-Springfield) is quoted in the updated article saying “This is what happens when you’re not careful with regulation.” Hopefully this inspires other organizations facing similar issues to stand their ground and work with the local government for more reasonable sign codes.

LED signs are the future, they will be around for a long time. Rejecting them in the sign code is  like rejecting the car because it goes faster than a horse and buggy. Obviously, this is the wrong way to approach the situation. Speed limits are put in place, better roads are built, stoplights are utilized and fair traffic laws are developed. This same level headed approach should be taken with LED signs. Fair regulations will promote a higher quality product and safer installations that benefit the public, organizations, and the industry in general.

I hope this post has been informative and helpful. As usual, I welcome ALL constructive comments. Please feel free to comment and add anything I’ve missed, or additional tips you may have regarding this topic. Please visit www.vantageled.com for many other resources, white papers, and of course: Great looking LED Signs!

**All posts/thoughts/writings are strictly the viewpoint of me and me alone and do not reflect nor speak for Vantage LED’s beliefs, attitudes, thoughts, etc. unless specifically stated.
Posted by Unknown at 3:00 AM

Even before LED message centers became more affordable (and, therefore, widespread), I was amazed by the restrictions placed on them.
As an example: Back in the 90's, the company I worked for installed a message center in a sign for a regional clinic, operated by a nearby hospital. At the time, the monochrome amber sign added about what a similarly-sized full color sign.
We warned them- long before beginning construction- that the sign would not be allowed to operate as intended (the town it was going in was even more restrictive than the one in Virginia you mentioned: the sign could only change from day to day- absolutely no more changes were allowed, even though there was a time/temp sign at the bank a block away on the same road that changed every 10 seconds or so). The hospital, sure they would be given a variance, insisted on going forward with the message center.
Of course, they weren't given the variance, though they may have been in the years since- I moved from the area about 10 years ago, and the sign was no more useful than a readerboard would have been.
Earlier this year, the company I now work for installed a message center on an access road alongside one of the busiest interchanges in Atlanta. The problem was, the area it sits in also has a somewhat restrictive sign code itself, but in another way: it allowed messages to change as desired- but no motion. Changes must be static (no wipes, scrolls or other animation going from one image/message to another) and the messages themselves must be static (no video or animation).
Since the object of the ordinance is to avoid distracting drivers on a road that sees something like two million commuters a day (and, since they're not big ride sharing here, probably at least a million vehicles) it's sensible restriction. The real problem lies in it not being properly enforced.
There's a sign- in the exact same jurisdiction- within 1/8 of a mile of the same location that runs video/animated messages 24/7- and a full color message center doing the same just 1/8 to 1/4 mile south, though in a different jurisdiction.
While linking the restrictions you pointed out to free speech was a wise move on the part of the church's legal representation and certainly a brilliant way to get the courts to take a look at- and possibly overturn- a poorly conceived ordinance, I think the biggest problem (so to speak) is the lack of any kind of uniformity in those regulations at most any level- be it town to town, county to county or state to state. And the sad truth of it is that some entities are much more likely to get a variance than others either because of their pocketbooks or their (correctly or incorrectly) perceived economic impact.
Finding some middle ground is an absolute necessity- before the “next thing” in displays comes along- and cause a whole new set of problems.

Thanks for the comment and examples. You make some very good points. I agree with you, enforcement is a very important factor in fair and reasonable sign regulations, and many times variance decisions can be in-consistent depending on the applicant.
Unfortunately, many organizations don't have the money, lawyers, size or ability to fight for change, and become casualties of the system. This type of problem occurs in many industries, and I agree with you that it usually takes someone else with more clout, money, public support, etc...to really effect change in the system. That's why I was so happy to see this church not give up, and that the story received national press.