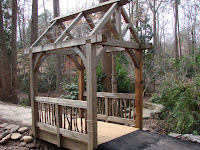 Some of the best opportunities of arisen from a simple, "No." Adversity is an opportunity to learn, grow, and improve. When a client isn't interested in your solution, that's an opportunity to find out why and see if there's a way to make your solution more interesting or appealing. Sometimes the solution just isn't required and you move on to other opportunities but perhaps by moving on too quickly, you just missed a big one.

I enjoy building bridges (metaphorically and literally). This probably started somewhere when I was in the Boy Scouts where I helped construct trail markers, steps on inclines and bridges over streams (better for the hikers and easier on the nature they're there to see). I quickly realized building bridges in life helped others cross the gap we all sometimes have around us. There are times when "burning that bridge" feels great, but you're left with no connection to the past and sometimes that connection can be a huge benefit to your future.

I once had a three hour conversation with a potential client. We talked about technology, discussed the sign industry and advances in design and form. The potential client asked me about software and developments and we discussed the pros and cons of different approaches and different manufacturers. At the end of the conversation, he thanked me for my time and said he had nothing for me but would keep in touch. At the end of a 3 hour conversation when the client said he had nothing for me, I thanked him for his time and followed up with him periodically with updates and additional information (even when I figured chances were good there wouldn’t be any sales opportunities with him).

That particular potential client hasn't bought a single thing since we spoke, but he has directed several new clients my way and is one of my greatest backers as far as referrals and "cheerleading" goes. I've had several people say to me Mr. Soandso just couldn't emphasize enough how important it was for them to call me as I would likely have the solution they were looking for. Building that bridge drove a lot of traffic my way which wouldn't have otherwise come around.

The bridge building takes place closer to home as well. I've seen people in jobs they dislike. For one reason or another the culture doesn't agree with them, the pay isn't high enough, they feel unsupported or it's just not a great fit. I saw two individuals leave a company one month apart from each other. The first to leave stormed into the office of his manager and dropped his computer, equipment and office items (thrown in a box) on the manager's desk saying, "This is my last day; you've got my home address and can send my paycheck there. I'm done." He stormed out (no explanation, no exit interview, no further exchange). The manager mailed the check and that was that. The second person to leave sat down with the manager and they had a long discussion as to what was working and what wasn't. At the end of the talk, they realized the fit wasn't working and he needed to go elsewhere.

The second employee to leave touched-base with the manager from time-to-time, the first was never heard from again. A few months after both had left, the manager received a few phone calls from companies checking on the ex-employees' work records. While he had little more to say on the first employee other than employment dates, the second employee received a commendation from him, a full background on his work (effort was great, just the culture fit wasn't there) and a solid referral.

How we leave a situation and how we follow-up makes a difference between building bridges and burning them. We can never be sure where and from whom an opportunity will arise. It's best to treat each situation with the most dignity, respect and hard effort as it makes a huge difference in not only how others perceive you but in how you ultimately see yourself. The next time temptation arises to burn a bridge, take a moment and realize there's a reason for a bridge's existence. Once a bridge is burnt, it's very difficult to cross the gap.

*I invite you to comment here and/or email me directly with requests at deacon@vantageled.com. Vantage LED has white paper resources and more educational material on the website (http://www.vantageled.com), please check it out when you have a moment. Note all posts/thoughts/writings are strictly the viewpoint of me and me alone and do not reflect nor speak for Vantage LED’s beliefs, attitudes, thoughts, etc. unless specifically noted.
Posted by Deacon at 3:00 AM

Really, in life, it's better to respond than to react. Have a reaction to a drug- bad thing. Have a response to a drug- probably a good thing. Emotional Intelligence says it's time to wear "Big Boy Pants" and not burn bridges. It does feel good and it's very John Wayne-ish to burn a bridge or stomp hard on one, but you have to travel the "long way around" without that bridge and John Wayne had a production beginning on a new movie. Take a deep breath and respond!